I tend to avoid politics, but couldn’t help but take note of Republican Mike Huckabee‘s recent rise in the polls, which has brought the same sort of media spotlight to his background as a Southern Baptist pastor that Mitt Romney has had to endure with regard to his Mormon faith. 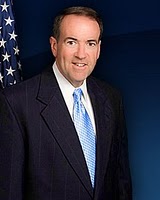 Huckabee has said he will not talk about what he called “intricate, nit-picky things of church doctrine” such as the role of women in the ministry, because he thinks issues like that aren’t relevant to the presidency, according to newspaper articles like this one.

One could argue that a person’s beliefs about whether God has ordained limited roles for women is not a nit-picky matter for someone who would represent all Americans, more than half of them female.

What really caught my eye, however, was Huckebee’s response to Newsweek magazine on whether he believes the Bible is inerrant. Huckabee said “I believe it is,” though he acknowledged that much of it is expressed in figurative language. He then went on to define his understanding of inerrancy.


“Inerrant” means if you follow the direction of the Bible, it will not lead you into error.

Huckabee is obviously trying to gain the support of voters from the religious right by using their language, but he apparently is not averse to giving it his own definition. Defining inerrancy on the basis of the Bible’s influence rather than its content would probably fall far short of acceptable among those who believe in the verbal, plenary, infallible inspiration of every word in the Bible, at least in the no-longer-existing “autographs,” or original versions.

I’d love to hear what others think about Huckabee’s definition of inerrancy. Comments are welcome.

Tony W. Cartledge is contributing editor of Baptists Today, in addition to teaching Old Testament studies and various ministry courses at Campbell University Divinity School. He formerly served as editor of the Biblical Recorder, newspaper of the Baptist State Convention of North Carolina, and as a pastor for 26 years. Tony is a graduate of the University of Georgia, Southeastern Seminary and Duke University, where he earned a Ph.D. He is the author of several books including the Smyth & Helwys commentary on First and Second Samuel and Telling Stories: Tall Tales and Deep Truths and several Bible study books for Nurturing Faith.